Secret Sounds of Bees May Offer a Window into Their Health

Experienced beekeepers can walk into an apiary and hear when something is not quite right: a queenless hive that sounds “off”, robbing, or perhaps a serendipitous swarming event occurring right in front of their eyes and ears. Although these major events are detectable to the trained human ear, are there more bee sounds that may hold a wealth of information that we have yet to explore? The study of vibroacoustics (sounds and vibrations) has been done in diverse fields, from naval submarine analyses to diving bird detection off the New Zealand coast (e.g. Ranjard et al., 2017), and also some exploration in honeybees. However, in honey bees, bee vibroacoustic studies have been mainly limited to queen status and swarming detection (e.g.Ferrari et al., 2008). When investigating honeybee vibroacoustics, one analyzes all sounds produced, from wingbeats to the vibrations produced from moving and working bees, to the clearly audible piping and tooting noises made by queens and workers. The collective of these sounds can be thought of as a bee language, complete with syllables and tempo. In a new project being conducted in collaboration with FutureBees NZ, nine different honey bee health “states” (such as the presence of a virgin queen or an active honey flow) have been linked to distinct vibroacoustic signals through the use of a machine learning program called Hidden Markov Models. While the program was originally designed in the United States, it is being assessed and re-trained with hives in New Zealand to ensure accuracy in different environments and hopefully provide more predictive power to beekeepers when assessing and evaluating colony health metrics. 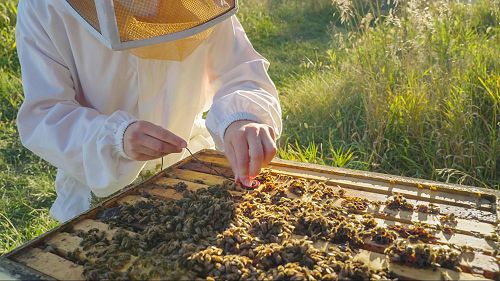